“I’ve had offers to move to other parts of the world. But, I’ve been in Hong Kong almost 40 years. It’s home to me.” – Larry Rashmi, Rashmi Tailors.

A custom suit has been on Andrew’s bucket list for several years, so after some research, we decided to make an appointment for him and Dan at Rashmi’s. Larry’s and son Vijay’s love of what they do was evident in the response to our first email to arrange an appointment. Vijay not only gave us very clear directions to their shop, but other helpful hints, everything from the best way to get into town (which is the MTR by the way), to where the good restaurants were, to advice on avoiding the street hawkers pounding the pavement in front of the tailor shops.

Vijay greeted us when we showed up for our appointment. Quiet but cordial, he made us feel right at home in their small, out of the way office. We really didn’t know what to expect, and prayed that they wouldn’t expect too much since we were such newbies. Larry arrived a few minutes after we did, and immediately took the helm. He quickly guided us through a series of questions. “Where do you live? Philippines? Then you’ll want a lighter weight fabric. What is your price range? I can do it for less, but we will have to use cheaper fabric. I don’t recommend it. Have you thought about styles? When do you need it? Next week? No problem. Who wants a beer?” You know…all the important stuff.

Even though Larry has been doing this for years, don’t mistaken him for being out of touch or out of style. He keeps up with trends in fits, colors, and fabrics. Once we settled on these, and the price, both Vijay and Larry got to work measuring the guys. The process took about 90 minutes, so allow for that. But, the guys kept us supplied with drinks and lively conversation the entire time, so it didn’t feel like a drag at all. After Vijay finished measuring Dan, Larry came behind and re-measured, just to be sure. He’s a perfectionist to the core. Then, as we were wrapping up, Larry was already on the phone with his workers, relaying fabric styles and measurements and told us, “They’ll start working on it now”. All this before we left the shop! 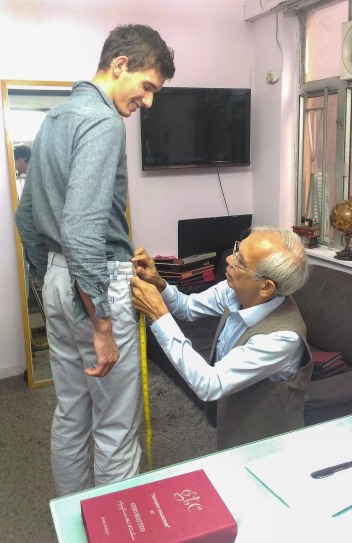 Larry gave us our receipt, and told us to take a picture of it with our phones. The reason? “People always lose their receipts, but they don’t lose their phones!” This guy is brilliant. “Call us on Tuesday afternoon, and we’ll have you come do a fitting.” That was the day before pick up, so we had to trust that they’d be close to finished.

Fast forward 72 hours. We went in as instructed, and both suits were nearly done. We “knew” they would be, but as someone who sews for a living, seeing such detailed work done in such a short amount of time was impressive. Andrew’s suit was perfect. Dan’s vest was a tiny tight across the shoulders, but otherwise equally perfect. When we went in for pick up Wednesday, it was fixed and everything was ready to go. Larry encouraged us to post pictures and reviews on Google, Facebook, and Instagram if we were happy, which we had already planned to. He made sure we took pictures of both guys with him so we’d have something to post. Again, brilliant, down to the smallest detail.

Yes we know. Dan’s wearing socks. It’s been noted by several people. But hey, they’re clean, and they even match. Don’t worry, we made sure he had shoes on his feet before he went outside.

So, the part everyone always wants to know. The cost. Both Dan and Andrew got 3 piece suits (jacket, pants, vest) and a matching Egyptian cotton shirt. They were around $700 USD each. We’ve spent enough time in Asia, and have been told by those who know everything that you can get suits for like, $100-200, so clearly we were ripped off, right?! Well, you get what you pay for. We could have easily gotten suits made for $100. And, they’d look and last like a $100 suit. We’d rather pay more for something of quality that will last longer than a year. If you walk into Men’s Wearhouse or Nordstrom or a similar shop in the US, you’ll pay around $700 for a nice suit, but it won’t be custom, no matter how many alterations are done. And, you won’t have the experience of dealing with guys like Larry and Vijay. We’ll definitely be back.

Not going to Hong Kong anytime soon? They travel! Check out Rashmi Tailor’s website at www.rashmi.com to see when they’ll be in your area.