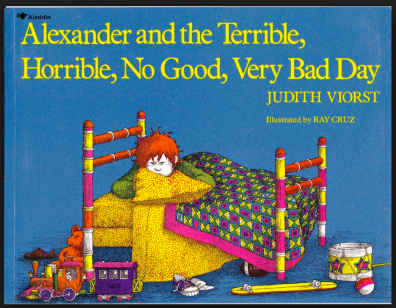 Who read this as a kid? Alexander had a bad day, made up of little things like waking up with gum in his hair, not getting a toy in his cereal box, and having to eat lima beans. He threatens to move to Australia repeatedly, because he knows it must be better “anywhere but here”.

We all have terrible horrible days. The worst bad days are the ones that start out disguised as good days, then violently switch as if to say, “Gotcha! Your day’s gonna suck after all!” Here we call them “cultural days”, because it’s usually not the big things that create the frustration, but a string of small, seemingly inconsequential offenses that are just that, cultural issues that no matter how long we live here, just drive us nuts. Heck, they might not even be cultural, but it’s how we tend to rationalize why it’s bothering us. I’m sure struggling with burnout isn’t helping matters, burnout seems to create a huge magnifying glass on every annoyance that you encounter.

I was blessed with one of those days last week. It was supposed to be simple. I was going to the grocery store (which I was dreading because it’s always busy), followed by going to a coffee shop to write for a while. I breezed through the grocery store, and was looking forward to rewarding myself with some quiet uninterrupted time at the coffee shop. The normally crowded parking lot was empty because…they were closed. Strike One. No problem, I’d just go to the mall a few blocks away to my backup shop. I would not lose my happy zen.

Yeah, no problem, but then it seemed like everything went wrong.

First, the mall parking lot was full. And instead of stopping cars from entering the rooftop level, the security guards just kept waving people in, then watched us circle repeatedly in vain looking for a spot. As I left, I politely mentioned, “It’s full…maybe stop letting people come up here?” to which they replied with a shrug. (and yes…there is a u-turn area before you make that final ascent, visible from the guard station.)

I finally found a place, and a place in the shop. It was next to the bathroom, which was fine until everyone, and I mean everyone, decided it was potty time. A constant revolving door of people going in and out, jiggling the locked handle, knocking, and jiggling again, just to be sure.

When I’d seen enough of the potty parade, I figured I’d take a quick look in the grocery store which was on the bottom floor. The journey downstairs requires passing through several security checkpoints, to be sure we’re not carrying any dangerous contraband. One time I was questioned about the scissors in my bag when entering a department store full of scissors, knives, cleavers…you get the idea. I guess people only commit violent crimes with their own personal scissors.

After presenting my bag to security at the grocery store for the 43rd time since leaving the rooftop level, I breezed through the clearance rack, didn’t see anything I was willing to stand in line for 30 minutes to buy, and went to exit. There was a security guard waiting (as usual), and she asked to see in my bag. Again. As I was leaving. No, I had absolutely nothing to hide, but by now I’d had it. It was clear she wasn’t going to let me “ignore and pass by”, so I had to take my backpack off, fiddle with the zipper that always gets stuck, all while rolling my eyes and sighing like an annoyed 7th grader. “This is SO RIDICULOUS” I whispered loud enough to be heard, then watched her penetrate the bag with her “search stick” and peel it open just far enough to see about two inches deep inside. Effective indeed.

Even reading through the above list, it sounds ridiculous. So there’s no parking. What else is new? My bags are always checked, all day, every day. It’s such a habit that I have to stop myself from doing it in the States. People have to pee. All normal stuff, but sometimes, the small things create a perfect storm. Those are the days I want to run away, maybe to Australia. But, it’s just best to go home, lock the door, and watch TV shows online while eating all the candy that I obviously stole from the grocery store. Assuming the internet actually works. 🙂

I’m sure the internet always works in Australia.

2 thoughts on “Mars and Her Terrible, Horrible, No Good, Very Bad Day.”