Despite not pulling us out of our funk, Hong Kong offered just what we needed. Nearly five days of culture, calmness, and a bit of controlled chaos. So, now I’m going to share our take on Hong Kong. Through our eyes. Cue the sentimental, dramatic music.

We caught the earliest flight we could to maximize our first day. When the alarm went off somewhere around 3 am, we questioned whether we needed a vacation after all. We landed in Hong Kong around noon, and even though we have a pretty firm grasp on geography, it was bizarre  to arrive there in a just few hours, a place that seemed a world away when we were growing up.

Hotels in Hong Kong aren’t cheap. In fact, nothing is cheap. Just a heads up. We found a great hotel in Central, the business district, for around $200 a night. $200 was a bargain, and even then, it meant Andrew had to sleep on the couch. It’s removed from downtown, but it was quiet. Deafeningly quiet, except for the occasional serenade from the exotic birds in the zoo across the street. So SO worth it! It’s name is simply their address, 2 Macdonnell Road, yeah, we thought it was weird too. And, we quickly learned to tell taxi drivers Macdonnell “ROAD”…Just “Macdonnell” had our first driver asking which McDonald’s we wanted to go to. Which, if you’re wondering, the one to go to is Admiralty Station. More on that later.

Besides taking pictures and detoxing from life, the big thing the guys wanted to do in Hong Kong was have tailored suits made. Andrew’s wanted one for years, in his world it has ranked above getting a car, which my wallet is grateful for. After a ton of online research, we made an appointment to visit Rashmi Tailors on Nathan Road, and in short, they rocked. If you need a suit, use them. Not coming to Hong Kong? They travel! They deserve their own blog post, so again, stay tuned. 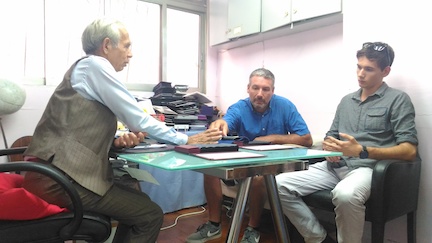 The guys met with Larry of Rashmi Tailors to find their style.

I almost bought a camera body and a couple of lenses at the “Great Digital Electronic Co.” but I didn’t, the whole thing ended up being weird, and while we weren’t in any sort of grave danger of being ripped off, I think God covered the whole situation. This lovely shop deserves it’s own post as well, for different reasons. Ahem.

After getting the guys measured for suits and dodging a dodgy situation, we went to a nearby mall to catch a quick dinner. Instead of being welcomed by the usual Gap, Pottery Barn and Victoria’s Secret, we entered a world of Prada, Gucci, and Louis Vuitton. The cheapest, most convenient food our desperate tummies found was Panino Guisto, where dinner for the three of us ran around $40 USD. They offered Acqua Panna water, for around $4 for an 8 ounce bottle. We were choking on the $4 price tag, until the shot glass sized bottles arrived, then all we could do was laugh to hold back the tears. Andrew, ever the thrifty one, ranted “How can people think this stuff is special!? It’s water.” We took a sip. Dang it, it was special. Not 50 cents an ounce special, but still pretty epic. Obviously epic enough to write a paragraph about. Oh, and the sandwiches were pretty epic too.

Just by sheer coincidence, we arrived on October 1, National Day, and I’m while still a little muddled as to who owns Hong Kong, to what degree, and what that all means, the one thing it did mean was that there were fireworks. Lots and lots and lots of fireworks! Maybe one of the best displays I’ve seen.

Pictures never, ever do fireworks justice. We tried.

So, that wraps up Day One, jumping in with two feet. I don’t even remember going to bed, must have been some seriously good water.