Fall is in the air! Well, that’s what I’ve read on Facebook anyways. We have had some rocking evening thunderstorms over the last few days, which have helped clear and cool the air, but otherwise, it’s just business as usual. 85 degrees during the day, 75 degrees at night. The Christmas decorations are going up with rapid speed, in keeping with the four month Christmas tradition here, and Fall is sadly overlooked. Last year I fought annoyance and bitterness while reading everyone’s Facebook posts and emails celebrating the arrival of sweaters, scarves, pumpkin spiced lattes, maple flavored everything, and orange leaves invading the trees. Who was I to complain? I live in an endless Summer, with no need for sweaters, scarves or boots, things that I loathed having to wear the year before.  But there I sat, moping and jealous of everything that everyone in the entire world was enjoying except for me. Grr.

So this year, instead of moping, I prepared.  I started hunting and gathering early for the months ahead. After whining about the lack of pumpkin last year, our family shipped some cans of pumpkin, but they arrived the week before Christmas, and the cravings were long gone (why the heck is that?). But never fear, they have been carefully stored for this year, I see pumpkin rolls in our future. I have since discovered that the local kalabasa squash makes an excellent substitute for pumpkin, but it’s a process to bake, scrape, blend…you get the idea. I’m not too proud to use canned food. Then, a few weeks ago, another friend sent a FABULOUS box of goodies, complete with my favorite Girl Scout cookies, coffee for Dan, and a jar of Trader Joe’s pumpkin butter.  It’s amazing what living on an island does for your level of gratitude. I never got excited about receiving band aids and antibiotic cream before living here, so you can imagine what Girl Scout cookies does for me.

Finally, I was in one of the malls the other day, which has a pretty fantastic selection of “western” food products. They are usually double or more the price of what we would pay in the States, but here, it’s fancy imported goods. I never knew Western Family mustard was a fine luxury food item. But anyways, there are a few big racks that always have discounted items, usually near the expiration date, since most people here, ex-pats included, can’t or won’t pay the original asking price. It’s a great way to find deals on a bite or sip of home. I heard rumors that there was pumpkin spiced tea on the rack for between $1-$2 a box, and when I went in a few days later, there it was…in all it’s glory. Sandwiched between a pile of crushed boxes of Jello and slightly dented cans of Spaghetti-Os (tempting, but I passed) was a mega stack of Fall tea goodness, all neatly arranged, ready to go to an appreciative home.  My goodness, we are blessed! My stash is complete, I am ready for Fall! I even passed on the Torani Pumpkin Spice syrup that magically appeared on the shelves the other day. At around $6 for the small bottle, it was tempting, but still out of my price range. 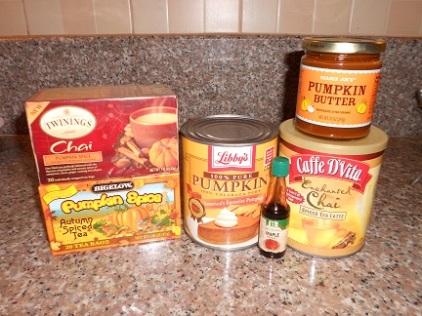 When I looked out one of our windows this morning, I even saw a dusting of red leaves on top of one of our neighbor’s trees.

That’s about the extent of it, but I’m determined to squeeze a bit of Fall spirit into the Christmas season that engulfs us. And, while everyone is bundled up enjoying their chai lattes, I will be doing the same, but I’ll still be in a tank top and sandals.  There is always an up side.